As the 20 leading economies meet in Hamburg, a truly multipolar world is finally emerging. 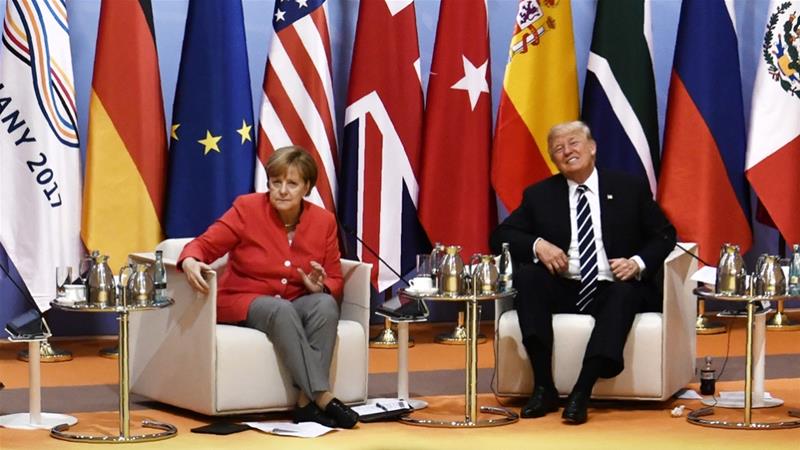 Starting with the United States of America. The US is the world’s leading economy and its greatest military power, with a “soft power” dominating the globe.

But the US share of the global economy fell from half to less than fifth since the end of World War II. And US influence has declined sharply since the end of the Cold War, notably since its reckless 2003 invasion of Iraq and the 2008 financial crisis.

Despite its lethal military power, Washington has failed to win a single major war since World War II.

It lost the Vietnam War, failed miserably in the Second Gulf War (after succeeding in liberating Kuwait in the first Gulf War), and for all practical purposes, this week’s news from the Koreas is a reminder why the 1950s Korean War remains unfinished. North Korea’s success in testing an intercontinental ballistic missile is seen as a slap in the face of the US and its menacing president on Independence Day.

The emergence of new regional and global powers has been particularly challenging to US power, as the likes of China, the EU, India and resurgent Russia limit its capacity to guide the global agendas.

President Barack Obama understood this new international reality and tried to steer Washington into a more realistic, humble and cooperative role on the global stage.

US power might not have been sufficient to dictate economic and strategic policies to other powers, but for long, it was the go-to guarantor of Western-led international order. Today, all that is in doubt and perhaps is going in reverse.

Donald Trump’s amateurish and reckless presidency is undermining US leadership. Not so much because of his protectionism as his banal populist nationalism. His rejection of the Paris Treaty on Climate Change and his total embrace of Saudi Arabia are only two examples.

If popularity is anything to go by, Trump is trailing far behind other unlikely world leaders such as Angela Merkel.

The rise of China

On the opposite spectrum, China has emerged as a formidable economic and military competitor to the US on the world stage.

Within three decades, China became the world’s “leading factory”, enjoying unprecedented trade surpluses and double-digit growth and creating massive wealth, all the while investing heavily in a military and especially naval power to reckon with.

Moving forward, no one power will be able to lead the complicated and challenging international system that has emerged from the crises of the post-Cold war era.

Of course, size matters, and China has been cruising steadily like an aircraft carrier. But it’s also been too aggressive in throwing its weight around to attract or perhaps intimidate smaller neighbours.

Attempts by the Obama administration to contain China through an “Asia Pivot” have failed miserably. And today, the Chinese are exploiting Trump’s shortsighted approach to Asia in order to further expand their influence on the continent. (Reportedly, China was happy to see Trump elected as it expected him to screw up big time).

By contrast, the strong and stable Presidency of Xi Jinping has further enhanced China’s global role. Earlier this year, he gave a speech at the Davos Economic Forum of the world political and economic leaders, the first of its kind for Chinese leaders, in order to underline Beijing’s interest in global leadership as America turns inwards. Xi even defended free trade from “blind” nationalism in an indirect jab at Trump’s “America first” policies.

China may continue to lag behind when it comes to soft power and innovation, and human rights, but its capacity for engineering and exporting new models of development have been attracting other countries – large and small – to follow suit.

As the G20 economies convene for their 9th annual meeting, there is little doubt about the enhanced role of China alongside the US, or the so-called G2 in influencing the group’s decisions, big and small.
But the two aren’t alone in vying for a place on top.

The EU, the world’s leading union

Speculations about the future of the European Union have been quite negative since the 2008 international financial crisis disproportionately affected some of Europe’s weaker economies. And pessimism spread after the UK voted to leave the EU last year amid increasing pressures from emboldened Putin’s Russia to the East and from skeptical Trump’s America to the West.

But the world’s largest economic union has rebounded, at least psychologically, over the past several months as elections, notably in France, gave it a new momentum and vigour.

The same German-French partnerships that allowed the EU to become the largest economic market and union it is today promises to grow stronger under the duo of Merkel-Macron.

The more seasoned and more experienced Chancellor Merkel has emerged as the de facto leader of the union on economic, and also on strategic, environmental and humanitarian issues.

This week, as she hosts the G20 summit, the German Chancellor is more popular in her country and around the world than the US president. It’s indeed paradoxical that the two great powers defeated in World War II, Germany and Japan, have emerged in the Trump era as the two most steady voices of the liberal world order.

Although she is seen as a voice of reason on new global challenges from environment to refugees, Merkel has also proven to be a calculating and, some would even say, “Merkevilian” politician able to successfully manoeuvre her way around the traps and pitfalls of European and world politics.

In that way, Merkel’s power and influence is both enhanced and amplified by and through the EU, and is emerging as an attractive third choice, nicely positioned in the middle between Trump’s America and Xi’s China.

However, to its disadvantage, the administratively complicated and slow-functioning EU tends to take a back seat to American and Chinese leadership which enjoy greater capacity to deliberate and respond.

The three leading powers, US, China and the EU, along with their respective leaders, present distinct and contrasted models, visions and governing styles in what increasingly looks like a post-American world.
The multipolar world that French President Jacques Chirac preached around the 2003 Gulf crisis when France and Germany opposed the 2003 invasion of Iraq is finally upon us.

Moving forward, no one power will be able to lead the complicated and challenging international system that has emerged from the crises of the post-Cold war era.

The dollar, the Pentagon, Hollywood and Harvard might be leading for now, but as US hegemony wanes, so will a lot of what it represents to the world. Or, in tune with the times of globalisation, these and other American brands will probably become more global and less American with time.

This is a far from democratic world, but we are slowly and surely moving away from the bipolarity of the Cold War and unipolarity of its immediate aftermath.

One could only wish that world powers show the ever more needed responsibility, maturity and capacity to meet the challenges of the 21st century with less conflict and more cooperation. Wishful thinking?

Marwan Bishara is the senior political analyst at Al Jazeera.