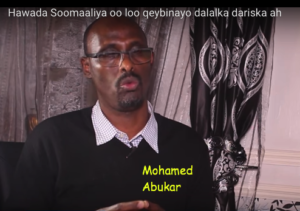 Mohamed Abukar Nur is a previous employee of Nairobi-based Civil Aviation Office (administered from Montreal Canada) that has been in charge of Somalia’s airspace in the past 26 years. Federal Government of Somalia tried to re-take this institution, however, the business continues in Nairobi as usual.

The previous Somalia’s Minister of Transportation and Communication, Said Qorshel–before exiting the office– negotiated a deal to relocate the aviation operation in Mogadishu.
Then, Hassan Sheikh’s government took complete power on September 10, 2012. Currently, Ali Jama Jengeli is the minister of transportation and civil air travel for the DFS outgoing administration. Mr. Jengeli ceased all the work pertaining return of Somalia’s Air Traffic Control Operations back to where it belong.